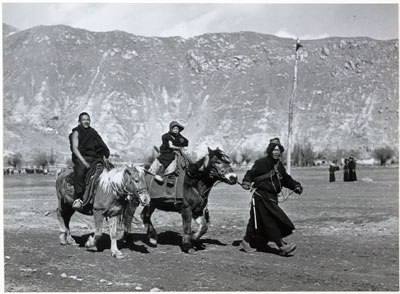 Young incarnate lama in the Regent's procession on the occasion of the Regent's return to Lhasa from Samye. The lama is seated on a tall wooden saddle and dressed in monk's clothes but with a hat ornamented in turquoise and gold. His horse is led by a monk servant. A telegraph pole appears to be standing on the centre right of the image in the background

Notes on print/mount - The back of the print is covered in crop marks and reproduction instructions. The reference 'C.13.18' has been written on the back of the print in pencil, as has the caption "Tiny incarnation lama in the Regent's procession". A thin piece of paper has been stuck across the top back edge of the print and folded over the front of the image. This was used for transferring cropping and reproduction instructions. The caption has been repeated on this piece of paper. [MS 01/04/2006]

Other Information - Description: Entry in Mission Diary for November 23rd 1936: "More officials pass, then a tiny incarnation lama, aged about four, is led past on a pony. He is dressed splendidly and wears on his hat an exquisite ornament of turquoise and gold. Slung across his back is a gold charm box containing a Buddha almost as big as himself" ['Lhasa Mission, 1936: Diary of Events', Part IX pp. 3-4, written by Chapman] [MS 01/04/2006]