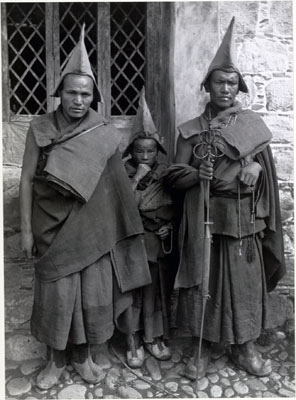 Three monks in tall hats in Lhasa. A small child between two older monks, one of which carries a staff

Notes on print/mount - 'Nying Pa monks' has been written beneath the image in the album in pencil, apparently not by Hugh Richardson. It also has a pencil-drawn asterisk above it [MS 25/08/2006]

Other Information - Related Images: Images prefixed with 'C.6' comprise a group of negatives containing images of Trimon and 4th/5th rank officials, Amir Khan and staff, Ringang, lunch party, Yellow Hat Monks, Potala views, Norbhu Lingka stables. They all seem to have been taken between October 1st - 3rd 1936. This image has also been included in a group called 'City and People' in his handlist [MS 18/03/2006]