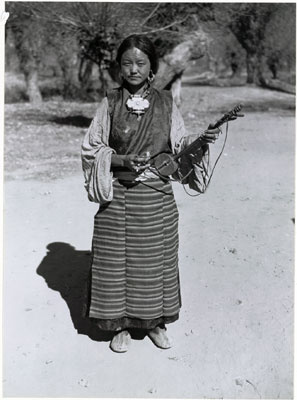 A woman dancer and fiddler who performed as part of a troupe in the Dekyi Lingka in November 1936. She is wearing a brocade outer garment and has an elaborate charm box or gau at her neck

Notes on print/mount - 'Khampa woman' has been written beneath the image in the album in pencil, apparently not by Hugh Richardson [MS 25/08/2006]