Amchi outside a sick man's tent 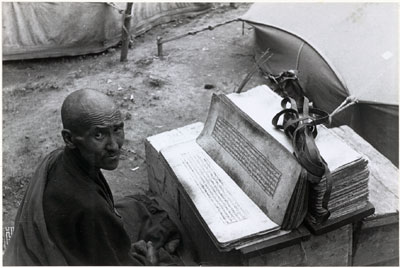 A lama doctor, or amchi, reading religious texts outside a sick man's tent. Lamas were often trained in medicine and would be called on to administer medicine and to chant an appropriate religious text. The texts are bound with a leather strap. This photograph was taken in the hospital camp set up by the British Mission doctor, Dr Morgan, in the grounds of the Dekyi Lingka. The tent style is distinctively non-Tibetan and the amchi is supporting his texts upon a package crate

Notes on print/mount - The back of the print has many crop marks and other instructions on how to reproduce the image. These are all written in pencil, although in a variety of different hands suggesting that a number of people were involved in the process. The caption "A Lama Doctor reading the scriptures outside a sick man's house tent" has been written across the top. The reference number 'C-S-8" has been written across the middle. This relates to the numbering system that Chapman adopted for the images taken whilst on the British Mission to Lhasa. The instruction "Cut as shown and reduce to 5 5/8 [inches] across" has been written in the bottom right hand corner [MS 21/2/2005]

Manual Catalogues - Caption in Chapman's hand-written list of negatives made whilst on the Mission to Lhasa, 1936-7 [See PRM Manuscripts Collection]: 'Ditto Ditto [Professional prayer outside tents] close up of his face and books'; PRM Manuscripts Collection: ‘List of Tibetan Prints and Negatives’ - Book 4: ‘12/1 - Professional reader of Buddhist Scriptures, often called in, in case of sickness’ [listed as C.5.8] [MS 18/03/2006]