View of Dekyi Lingka in trees 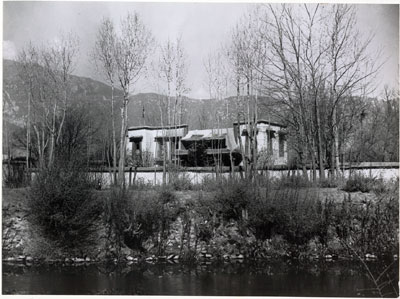 View of the Dekyi Lingka, the residence of the British Mission in Lhasa, set amongst trees in the grounds belonging to Kundeling Monastery

Notes on print/mount - 'Dekyi Lingka Mission HQ' has been written beneath the image in the album in pencil, apparently not by Hugh Richardson [MS 25/08/2006]

Manual Catalogues - Caption in Chapman's hand-written list of negatives made whilst on the Mission to Lhasa, 1936-7 [See PRM Manuscripts Collection]: 'Ditto [Our house [Dekyi Lingka] from over river] nearer view no tents'; PRM Manuscripts Collection: ‘List of Tibetan Prints and Negatives’ - Book 3: ‘26/3 - The Dekyi Lingka, a summer palace belonging to Gundeling monastery lent to the mission [MS 25/08/2006]