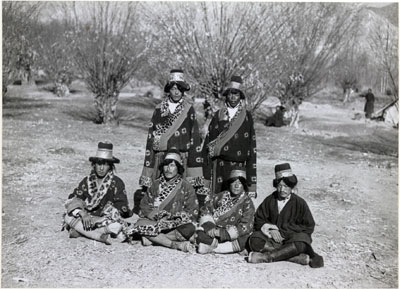 A formal group portrait of the grooms or syce who looked after the horses used by the Mission. They wear fur coats and tall hats with a gold band and were considered by some of the Mission members, Chapman included, to be the most striking individuals in the group. On this occasion it seems that all the Mission members had their photographs taken prior to visiting the Potala Palace for their second official group visit

Notes on print/mount - 'Mission Staff' has been written at the top of the page in the album in black ink, apparently not by Hugh Richardson [MS 12/06/2006]

Other Information - Related Images: Images prefixed with 'C.18' comprise a group of negatives containing images of the mission personnel, the Dalai Lamas’ tombs and the Potala. They seem all to have been taken on November 22nd 1936 [MS 18/03/2006]