Sikkimese and Tibetan advisors to the Mission 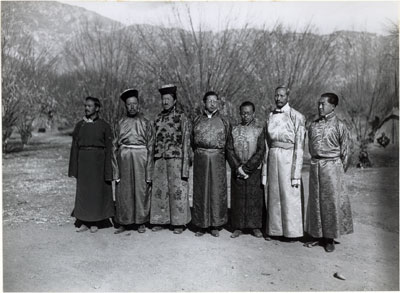 Group of seven Tibetan and Sikkimese officials and advisors who assisted the British Mission in Lhasa. They are here having their photographs taken as a group in the grounds of the Dekyi Lingka prior to an official visit to the Potala. A tent belonging to the Mission can be seen out of focus in the background on the right

Notes on print/mount - 'Mission Staff' has been written at the top of the page in the album in black ink, apparently not by Hugh Richardson [MS 12/06/2006]