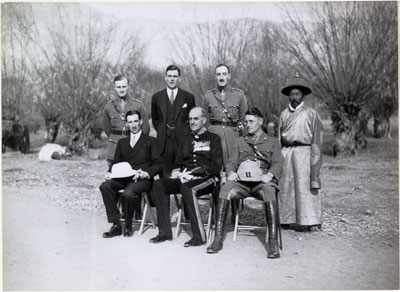 Members of the 1936 British Mission to Lhasa. From left to right, top row: Dagg, Chapman, Nepean, Norbhu (interpreter); bottom row: Richardson, Gould, Morgan. The group are in formal dress in preparation for their second official visit to the Potala, which was to take place later that morning

Notes on print/mount - 'Mission Staff' has been written at the top of the page in the album in black ink, apparently not by Hugh Richardson. Above and below this image, identifying individuals from left to right, Richardson has also added in pencil '[top]Dagg, Chapman, Nepean, Norbhu, [bottom] H. E. Richardson, Sir Basil Gould, Brigadier Morgan' [MS 12/06/2006]

Other Information - Description: Members of the British Mission to Lhasa (1936-1937). From left to right. Back row standing: Dagg, Spencer Chapman, Nepean, Norbhu. Front row seated: Richardson, Gould, Morgan. Dagg was a wireless operator, Spencer Chapman: the personal secretary to Gould, Nepean: another wireless operator, Norbhu: interpreter and diplomatic aide to the Mission, Richardson: British Trade Agent at Gyantse, Gould: Political Officer for Sikkim, Bhutan and Tibet and in charge of this Mission to Lhasa, Morgan: Mission doctor. In such official-style portraits the military men in the team wore full dress uniform whilst the civil servants wore morning dress. The only non-British member of the Mission, Norbhu Dhondup, wore Tibetan dress suiting rank as a Dzasa. [CH 2003]

Other Information - Related Images: Images prefixed with 'C.18' comprise a group of negatives containing images of the mission personnel, the Dalai Lamas’ tombs and the Potala. They seem all to have been taken on November 22nd 1936. Prior to the visit, Chapman and other mission members took photographs of all the Mission staff, apparently taking advantage of the fact they were donned in formal attire in preparation for their official visit to the Potala [MS 18/03/2006]