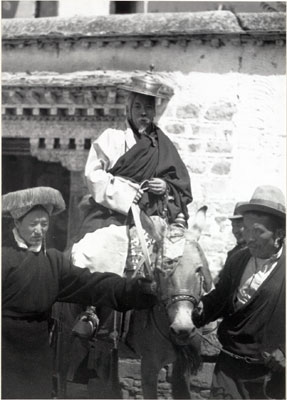 Notes on print/mount - 'Ngagchhen Rim po-che' has been written beneath the image in the album in pencil, apparently not by Hugh Richardson [MS 12/06/2006]

Manual Catalogues - Caption in Chapman's hand-written list of negatives made whilst on the Mission to Lhasa, 1936-7 [See PRM Manuscripts Collection]: 'Ditto [Ngagchen Rimpoche] on horse' [MS 27/03/2006]

Other Information - Album: This image appears alongside two others of the Taring Rinpoche and Mondo on page 26 of Hugh Richardson's album 'Lhasa 1936' [MS 12/06/2006]