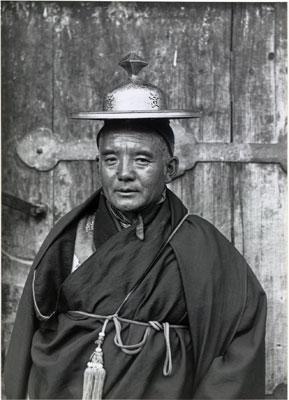 Notes on print/mount - 'Taring Rinpoche' has been written beneath the image in the album in pencil, apparently not by Hugh Richardson [MS 12/06/2006]

Biographical Information - Taring Rinpoche (Lhatsun Rinpoche) wearing the gold-lacquered papier-mâché hat used by monks when riding on horseback. Taring Rinpoche was a high-ranking monk official and the half-brother of Rajah Taring of Sikkim, (making him Jigme Taring’s uncle). At one time he was in charge of all the monasteries in Sikkim and according to Spencer Chapman had “the wisest and most expressive eyes in all of Asia.” He was a son of Yeshi Dolma, who later married Chogyal Tutop Namyal of Sikkim. And the Incarnate Lama of Mondroling monastery. He lived in Gangtok in Sikkim but was expelled in 1934 and returned to Lhasa. [CH 2003]

Other Information - Album: This image appears alongside two others of the Ngagchen Rinpoche and Mondo on page 26 of Hugh Richardson's album 'Lhasa 1936' [MS 12/06/2006]