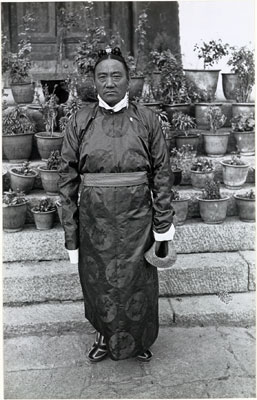 Tsarong Dzasa, full length, on the steps of his house. Rows of potted plants can be seen in the background

Notes on print/mount - 'Tsarong Dzaza' has been written beneath the image in the album in pencil, apparently not by Hugh Richardson [MS 12/06/2006]

Manual Catalogues - Caption in Chapman's hand-written list of negatives made whilst on the Mission to Lhasa, 1936-7 [See PRM Manuscripts Collection]: '1/2 Tsarong in front of his [steps?]'; PRM Manuscripts Collection: ‘List of Tibetan Prints and Negatives’ - Book 2: ‘29/4 - Tsarong Dzasa, the son of an archer of the late Dalai Lama’s bodyguard, who married the Leicen of the Tsarong estates. He is the strong man of Tibet’ [MS 28/03/2006]

Other Information - Album: This image appears alongside two others of Jigme Taring and Ringang on page 24 of Hugh Richardson's album 'Lhasa 1936' [MS 12/06/2006]

Other Information - Related Images: This image seems to be that referenced by 'A.19' in Chapman's handlist. Images prefixed with 'A' comprise a group of negatives containing images of officials and the Regent riding in ceremonial dress up to the Potala, all apparently taken on February 13th 1937. On this day Tsarong took Chapman unofficially to the Potala so that he could take photographs of the New Year ceremonies (no other Mission members accompanied because an official invitation had not been extended to them). This photograph, therefore, was probably taken at the end of the day, when Tsarong returned home with Chapman [MS 28/03/2006]