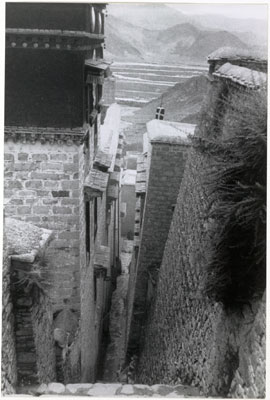 A view down an alleyway in Drepung Monastery. The image draws attention to the narrow passages between building and the steep angularity of the monastery, it being built on a hillside outside Lhasa

Notes on print/mount - 'Drepung' has been written beneath the image in the album in pencil, apparently not by Hugh Richardson [MS 12/06/2006]

Other Information - Related Images: Images prefixed with 'CM' comprise a group of negatives containing images of Drepung Monastery, shengnoes at Drepung, river behind Dekyi Lingka, Pargo Kaling, Chakpori, Turquoise Bridge, boats, Potala, ‘air views’. They were all taken between August 30th and September 3rd 1936, with images of Drepung being taken on the earlier date on the occasion of the first official Mission visit to Drepung Monastery [MS 12/06/2006]