Sera from nearby mountainside 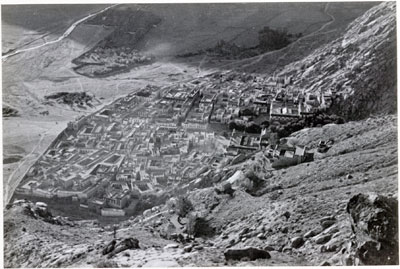 An aerial view of Sera Monastery taken from the surrounding hills in the north east of Lhasa. Chapman in particular would usually take to the hills on his days off and took many aerial and panoramic photographs on these occasions

Notes on print/mount - 'Sera' has been written beneath the image in the album in pencil, apparently not by Hugh Richardson [MS 12/06/2006]

Other Information - Album: This image appears alongside three others of Sera and Drepung Monasteries on page 20 of Hugh Richardson's album 'Lhasa 1936' [MS 12/06/2006]

Other Information - Related Images: Images prefixed with 'CE' comprise group of negatives containing images of crowds coming to watch football match, hill monastery, views of Sera and plain, big Buddha painting and small Buddha carvings, lunch with Chikyak Kempo, R. S Norbhu, Chinese wireless and scenes around Chikyak Kempo’s house, roofs of Cathedral [Jo Khang. They were all taken between October 20th - 27th 1936, with this image probably being taken on October 25th, a Sunday and therefore a day off for Mission personnel who frequently went into the surrounding hills on these occasions [see text of Mission Diary] [MS 12/06/2006]