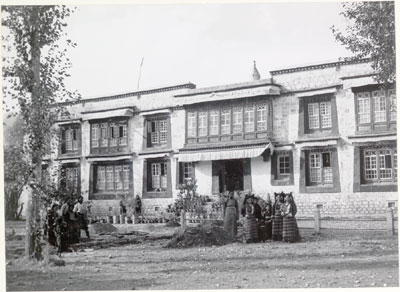 Notes on print/mount - 'Tsarong's House' has been written beneath the image in the album in pencil, apparently not by Hugh Richardson [MS 10/06/2006]

Manual Catalogues - Caption in Chapman's hand-written list of negatives made whilst on the Mission to Lhasa, 1936-7 [See PRM Manuscripts Collection]: 'Tsarong’s house Group in foreground'; PRM Manuscripts Collection: ‘List of Tibetan Prints and Negatives’ - Book 1, From Gangtok to the Natu La August 1936: ‘39/3 - Tsarong’s new house on the outskirts of Lhasa. Notice incense burner on roof and real glass in windows’ [MS 28/03/2006]

Other Information - Related Images: Images prefixed with 'C.9' comprise a group of negatives containing images of Tsarong’s family and his house, a Tibetan stove, preparing paint for Potala and camels. The date is not certain, but it seems most likely that these images of Tsarong and his family were taken on the occasion of the first formal visit to his house on September 2nd 1936 [MS 28/03/2006]