Yaks in street in outer Lhasa 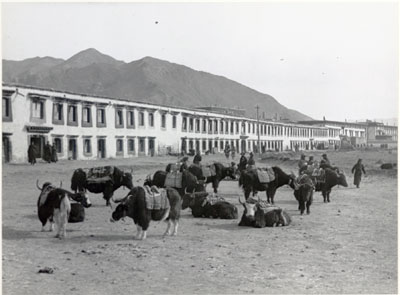 Row of domestic buildings in outskirts of Lhasa with yak caravan in foreground.

Notes on print/mount - 'Lhasa City - Muru' has been written beneath the image in the album in pencil, apparently not by Hugh Richardson [MS 18/08/2006]

Manual Catalogues - Caption in Chapman's hand-written list of negatives made whilst on the Mission to Lhasa, 1936-7 [See PRM Manuscripts Collection]: 'Yaks in city before street'; PRM Manuscripts Collection: ‘List of Tibetan Prints and Negatives’ - Book 1, From Gangtok to the Natu La August 1936: ‘41/4 - Yaks and Dzzos (half-bred yaks) at outskirts of Lhasa city’ [MS 14/08/2006]