Potala from the east with nomads on path 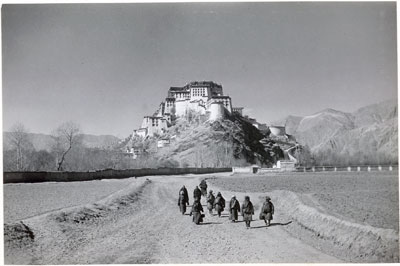 The Potala from the east, showing the round-walled watchtower, Taktshang Gormo. Nomad pilgrims walking away from the Potala in the foreground

Notes on print/mount - 'Potala from east' has been written beneath the image in the album in pencil, apparently not by Hugh Richardson [MS 10/06/2006]

Other Information - Cultural Background: Chapman described in his book Lhasa the Holy City [London: Chatto & Windus, 1938; reprint, London: Readers Union Ltd., 1940] how in the weeks before the New Year festivities in February, it was common to see groups of nomads walking daily on the pilgrimage route around the Potala and Lhasa called the Lingkhor : "While they are in Lhasa, in fact this may be the primary object of their journey, they visit the shrine of the Dalai Lama and the Cathedral. The nomads, in the off season, are notorious brigands, making it unsafe for pilgrims or merchants to cross the Chang Tang except in large caravans, which are formed at regular times each year for mutual protection. They rarely rob their victims of money or valuables that are being taken as an offering to the Jo-kang or the Dalai Lama's tomb, for the nomads are notoriously pious, and sometimes they will save up for years and present surprisingly rich gifts to these shrines" [ibid., p.160] [MS 4/4/2005]

Other Information - Setting: The Potala Palace showing the Taktshang Gormo watch tower on its eastern side. A group of Tibetans (including monks) can be seen walking away from Lhasa. They may have completed the route of the Lingkhor (sacred walk) around the city in order to gain merit and the chance of a better rebirth. Lhasa was a site of pilgrimage for people from all over Tibet. Due to its height the Potala dominates the landscape of the Lhasa valley serving a visual as well as a spiritual focus for the city. Western visitors also succumbed to this awe inspiring sight [CH 2003]