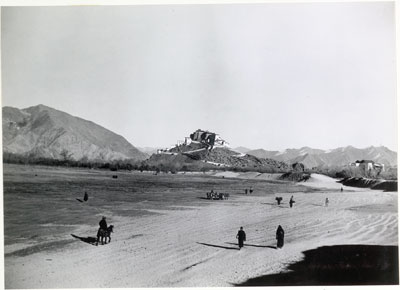 The Potala seen from the west across the plain. People walking along a track, some with mules. Large shadow cast in the bottom right hand corner of the image

Notes on print/mount - 'Potala from west' has been written beneath the image in the album in pencil, apparently not by Hugh Richardson [MS 10/06/2006]

Other Information - Setting: It is unusual to see the view from this sandy path from where the view is less scenic [TS 7/2/2005]