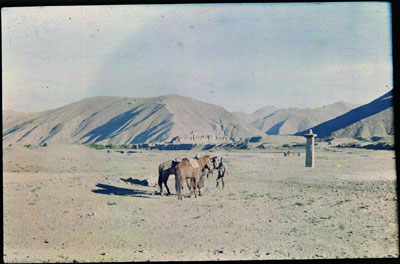 The ninth century pillar near the burial mound of Tride Srongtsen (khri lde srong brtsan) in the Chyongye ('phyong rgyas) valley west of the Yarlung valley. Richardson's travelling companions and horses may be seen in the foreground.

Other Information - Location: Richardson wrote an article about the location and the historical significance of the early burial grounds in the Chyonggye valley near Yarlung in Central Asiatic Journal , 8,2 (1963), pp. 73-92 reproduced in High Peaks, Pure Earth , London, Serindia Publications, 1998, pp. 219-233. "'Phyong-rgyas is some sixty-five miles south-east of Lhasa, near the head of a tributary of the Yar-lung Chu which flows south into the Gtsang-po near Rtse-thang. There, in brooding and majestic solitude, rise the burial mounds of the kings ... . Not far away to the north, at the foot of the hills which enclose the valley, is the village of 'Phyong-rgyas dominated by its rdzong ; and on a sheltered hillside above the village there is the Dge-lugs-pa monastery of Ri-bo bde-chen. Higher up the steep ridge on which the rdzong stands are the ruins of what is traditionally identified with Phying-ba'i Stag-rtse, the ancient stronghold of the Tibetan kings." (219-220) "There is ... near the village of 'Phyong-rgyas, and at some distance from the tombs, a fine stone pillar bearing faint traces of lettering of which the only legible part - when I saw it - was the name Khri Srong-lde-brtsan. ... What the pillar is doing in its present position is not clear. The place where it stands is level ground with no suggestion that there was ever a mound anywhere near it nor does it appear probable that an important tomb would be built at such a distance from the main burial ground. ... The inscription ... is a brief eulogy of the king in general terms. ... " (225) "The pillar ... bears on its south face the outline of a lion, incised in low relief. The carving is so faint it cannot be detected in the photograph. Its head is towards the left hand corner of the pillar and its two forefeet can be seen a little lower down. Below it are traces of a dragon in the Chinese manner. The free drawing of the lion and the stylized representation of the dragon are an interesting contrast." (229) [KC 30/5/2006]