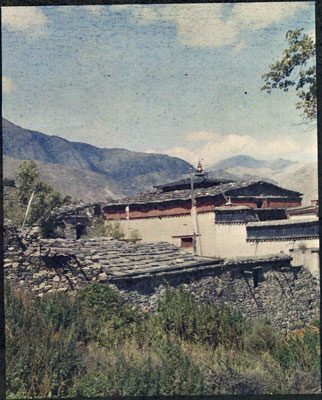 Manual Catalogues - Typewritten handlist entitled 'Hugh Richardson Collection, The British Museum. Photographs taken between 1936-50. Cameras: Zeiss Super Ikonta, Reflex Korelle. 300 colour slides (Dufay colour); copies made Jan. 1995.
[no.] 238. Lhobrak (Lhodrak) Lhakhang. In one chapel of this ancient monastery a peach tree was growing through the roof. In the dark and spacious main chapel was a huge five-fold image of Vairocana. This arrangement had a statue at each of the four corners, looking into the main image at the centre. The statues stood 8-10 feet high on tall pedestals.' [KC 11/10/2006]