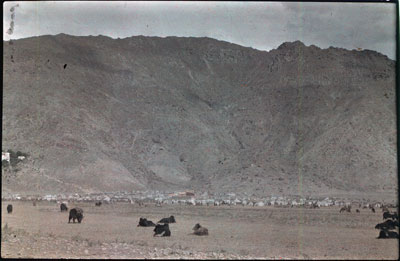 Tented reception camp at Doguthang plain at base of mountain with cattle in the foreground. This camp was set up by the Tibetan government to welcome the new child Dalai Lama. The famed 'Peacock Tent' can be seen in the centre of the camp. There are cattle in a field in the foreground.

Manual Catalogues - Typewritten handlist entitled 'Hugh Richardson Collection, The British Museum. Photographs taken between 1936-50. Cameras: Zeiss Super Ikonta, Reflex Korelle. 300 colour slides (Dufay colour); copies made Jan. 1995.
[no.] 226. Great gathering at Rikya east of Lhasa for the arrival of the Dalai Lama in 1940. The Peacock tent can be seen at the centre, surrounded by many other tents.' [KC 11/10/2006]