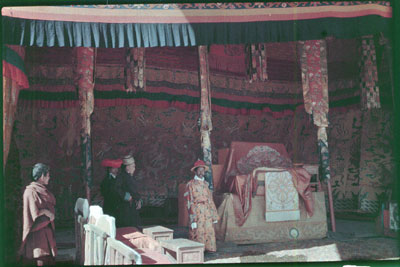 Research Publication - Clare Harris and Tsering Shakya, Seeing Lhasa , 2003, Chicago: Serindia Publications, p.80-1. Caption, "T he Peacock tent, decorated with silk fabrics for the 14th Dalai Lama’s arrival in Lhasa at the age of four and a half, following his recognition in Amdo (northeastern Tibet). A party travelled to the outskirts of Lhasa to greet the new incarnation which included the British Representative in Lhasa, Hugh Richardson. Richardson was therefore the first foreign national to meet the young Dalai Lama and he wrote that: 'the Dalai Lama was ... led to a throne inside a gaily coloured reception tent,hung with golden brocade.' (1998:673) In this image Norbhu Dhondhup stands next to the throne." [KC 21/10/2006]