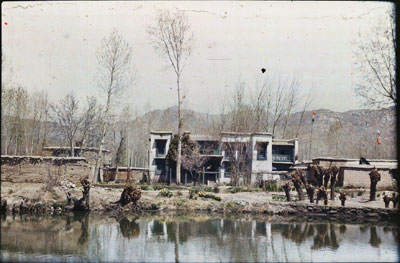 Dekyi Lingka in late winter. The building is surrounded by trees and the Menchu stream flows in the foreground. The willow trees on the bank of the stream have been trimmed giving a better view of the house.

Manual Catalogues - Typewritten handlist entitled 'Hugh Richardson Collection, The British Museum. Photographs taken between 1936-50. Cameras: Zeiss Super Ikonta, Reflex Korelle. 300 colour slides (Dufay colour); copies made Jan. 1995.
[no.] 19. Dekyilingka. Servants quarters and stables are at the far left. Hugh Richardson's room is on the left of the main building, his office adjacent to the right in the narrow block. The doctor and visitors stayed in the rooms on the right. (Doctors included Morgan, Guthrie, O'Malley, and Terry, the latter from Burmah Shell.) The wall to Dekyilingka was taken down around 1944 by Ludlow and Sherriff to make room for the garden.' [KC 09/10/2006]