Pavilion of the Norbu Lingka palace in Lhasa 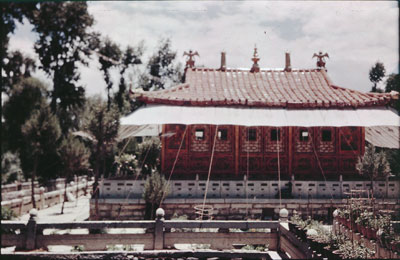 A pavilion of the Norbu Lingka pavilion. It is surrounded by a walled garden with plants in flowerpots. There is an awning stretched from each side of the roof of the pavilion to provide shade.

Other Information - Location: Hugh Richardson mentions the Norbu Lingka palace in High Peaks, Pure Earth , London, Serindia Publications, 1998, p. 304, "West of the main city lies the summer residence of the Dalai Lama at the "Jewel Park" of Nor-bu-gling-ka (1936-50). The park covers a large area containing four palace complexes, an opera ground and some government buildings. First established by the seventh Dalai Lama in the mid-eighteenth century, the initial site was greatly augmented by the eighth and thirteenth incumbents. The present Dalai Lama added his palace as recently as 1954-6."