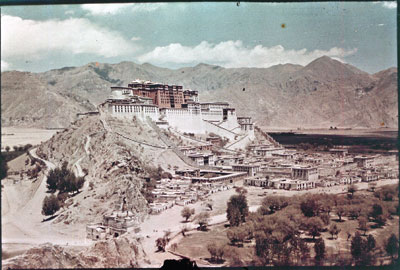 The Potala with Shö village below it taken from Chakpori to the west. Pargo Kaling, the Western Gate of Lhasa, may be seen on the left. The mountain tops in the background are covered in clouds.

Technical Information - The camera used to take this collection of colour slides (Dufay colour) were a Zeiss Super Ikonta and a Reflex Corella. [KC 09/10/2006]