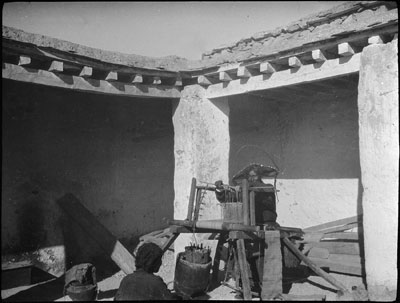 Woman weaver at Phari seated behind a large loom in a domestic courtyard. Another woman is seated in the bottom of the image

Notes on print/mount - One contact print made from this negative is contained in A. J. Hopkinson's negative case with the negative. The print was made using Velox paper. The caption "Tibetan woman weaving in yard of a rest house' has been written on the back of the print in pencil, as has the reference 'G.98' and another indecipherable inscription. The print has clearly been removed from an album or a paper mount as the edges have pieces of black paper stuck to them. The number '14' has been written in the top right corner of the front of the album [MS 19/08/2006]

Other Information - Related Images: Although this image is contained in Negative Wallet G, which mainly contains images taken in 1928, this photograph was taken when A. J. Hopkinson was first in Tibet, probably in the earliest stage of December 1926 - January 1927. This is indicated by evidence of the print having been removed from a black paper mount (possibly an album) and the inscription of a number in the top right hand corner on the front of the print. These are both features found on Hopkinson's early images of the region and provides further substantiation for the dating in the caption [MS 19/08/2006]