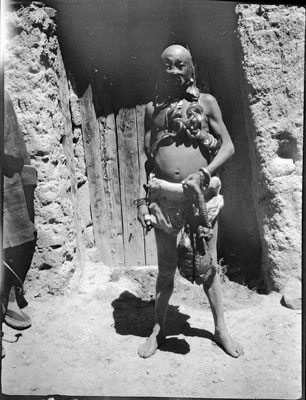 The Lugong or Scapegoat at Gyantse, who took the burden of the community's evils on his shoulders in order that they may be expurgated. Here he is seen covered in animal entrails before being chased from the town

Notes on print/mount - Two contact prints made from this negative are contained in A. J. Hopkinson's negative case with the negative. One print was made using Velox paper, the other does not have a trademark identifier on the paper. The velox print has the reference 'G.66' has been written on the back of the print in pencil. The other print has an indecipherable reference starting 'BB', the number 'P1353' and the instruction 'Same size' written on the back in pencil [MS 19/08/2006]

Other Information - Description: [Extract from taped interview, Richard Blurton and Mrs Hopkinson] '76 - The annual scapegoat at Gyantse, part of the temple dances, clad in animal skins and entrails. he holds the trachea, the liver and the lungs of a sheep. He was kept free for a year following the taking on himself of the evil of the community, and theoretically should die at the end of the year. However, this man had functioned for three years' [MS 12/08/2006]