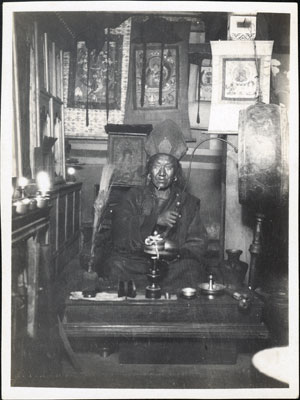 A monk seated in a monastery or temple in Phari poses for Hopkinson as he has his photograph taken. He has a variety of ritual objects in front of him and the walls are covered with thangka. Butter lamps can be seen on the left of the frame

Notes on print/mount - One contact print made from this negative is contained in A. J. Hopkinson's negative case with the negative. The print was made using Velox paper. The caption "A Nakpa lama doing 'Evensong' in his temple at Phari - a recent writer who said (in the weekly 'Times of India') that Tibetans fear the camera was quite wrong, as this as other pictures show' has been written on the back of the print in pencil, as has the name 'A. J. Hopkinson' and the reference 'G.58' [MS 19/08/2006]