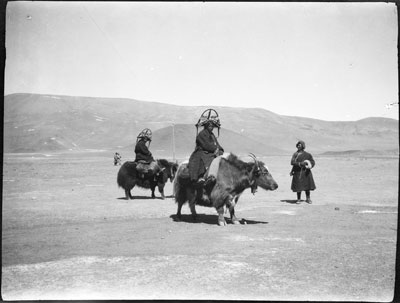 Notes on print/mount - One contact print made from this negative is contained in A. J. Hopkinson's negative case with the negative. The print was made using Velox paper. 'A. J. Hopkinson' has been written on the back of the print in pencil, as has the reference 'G.54' [MS 19/08/2006]

Other Information - Description: [Extract from taped interview, Richard Blurton and Mrs Hopkinson] '54 - Two ladies travelling on yaks. On festival days women carried all their wealth on their headdresses. When EH [Eleanor Hopkinson] was in Tibet in the 1940s, however, the practice of women wearing the large wooden headdresses was dying out and most women merely wore a long plait in which were tied precious stones' [MS 12/08/2006]