A traveller on Tuna plain 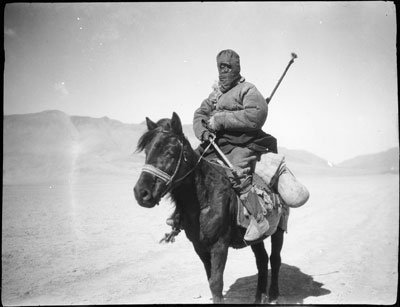 Notes on print/mount - One contact print made from this negative is contained in A. J. Hopkinson's negative case with the negative. The print was made using Velox paper. 'A. J. Hopkinson' has been written on the back of the print in pencil, as has the reference 'G.53' [MS 19/08/2006]

Other Information - Description: [Extract from taped interview, Richard Blurton and Mrs Hopkinson] '53 - Horse rider in winter clothing, near Phari, and with rifle across his back with a tuft in the muzzle to keep the dust out. Possibly the mail-runner on the route from Gangtok to Gyantse. Having crossed the Natu La from Sikkim and come down in to the Chumbi valley, then over another pass, and then suddenly you came up on the Tibetan plateau at Phari, which is situated at the base of Chomolhari. It was here that you changed transport from mules to yaks - there was no longer any fodder for mules; yaks were slower but cheaper and more reliable. Yaks were for the baggage, not for riding on' [MS 12/08/2006]