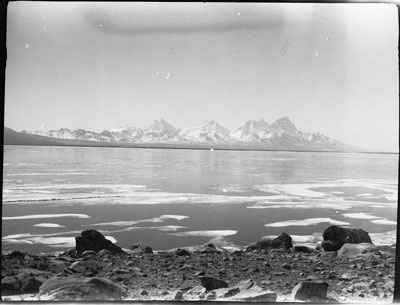 Dochen lake. Mount Chomolhari can be seen in the distance

Other Information - Description: [Extract from taped interview, Richard Blurton and Mrs Hopkinson] '44 - The frozen Dochen-tso lake (both pack ice and fresh ice), sometimes in AJH's [Hopkinson's] early days known as the Bam-tso. Similarly Yatung was previously known as Sha-si-ma. In the background is the Chomolhari range with the Chomolhari peak on the right' [MS 12/08/2006]