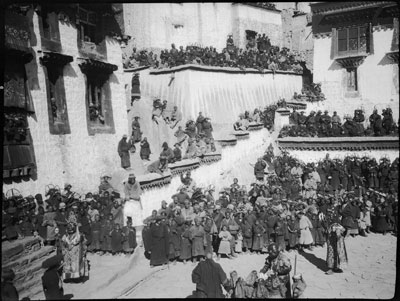 Part of the Tse Gutor ceremony at Palkhor Chode, Gyantse, which marked the end of the old Tibetan year. See A. J. Hopkinson Archive, OIOC British Library, Mss Eur D998/54, Journal Letters from Gyantse and Various Camps, 1927-28, commencing February 19th 1928, Gyantse, page 4 ff for a fuller description of this event. The figure of Hashang can be seen close to the lower right edge of the image, identifiable by the large mask, while onlookers crowd around the courtyard perimeter

Notes on print/mount - One contact print made from this negative is contained in A. J. Hopkinson's negative case with the negative. The caption "A scene during the dance" has been written on the back of the print in pencil, as has the reference 'G.39' [MS 19/08/2006]