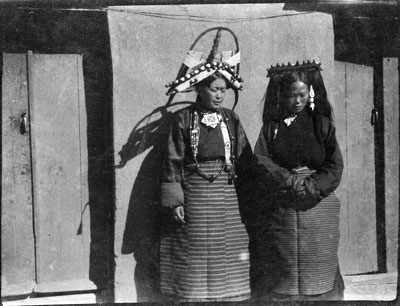 Mrs Taring (left) and Mrs Pemba (right) in the Fort at Gyantse. Mrs Taring wears the elaborately decorated headdress typical of the Gyantse region, while Mrs Pemba wears that typical of the Lhasa region. Both wear other jewellery such as gau amulet boxes around their necks and other items. The photograph demonstrates very well the regional differences in aristocratic women's dress that pertained in Central Tibet