Yak graziers in the Tangka La 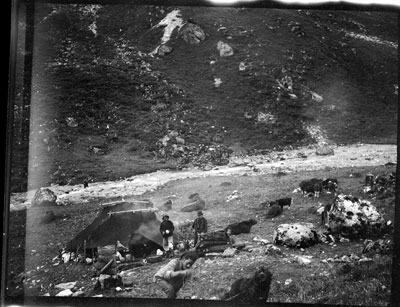 A group of yak herders on a hillside near the Tangka La crossing, which was one of the crossing points from the Chumbi Valley into Sikkim in the northern part of the Chumbi Valley. A black, yak hair tent can be seen on the left of the image with various open weave baskets and other vessels and packs placed on the ground nearby. A tethered dog can be seen in the lower right of the image. Yaks can be seen on the hillside near the stream running through the valley below and one man appears to be wading through the water on the left. A. J. Hopkinson comments travelling on this route only once in his journals and diaries [see Notes] and it seems that this photograph may, therefore, have been taken on or around September 15th 1927 when he was en route from Yatung to Sikkim via Tangka La

Other Information - Description: [Extract from taped interview, Richard Blurton and Mrs Hopkinson] '6, 7, 8, 9 and 10 - an encampment of yak grazers, three miles from the summit of the Tangka-La. Various views of the encampment, the yaks, dzo (6) and the valley around' [MS 29/07/2006]