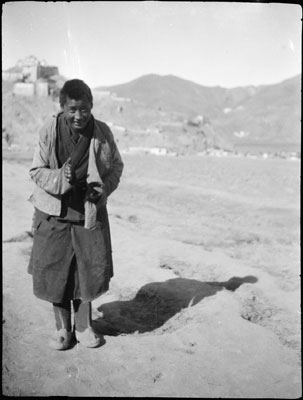 A young monk from either Sera or Drepung monasteries in Lhasa [see Notes] who accompanied A. J. Hopkinson part of the way back to the Fort following a photographic trip to Gyantse at the end of 1927. Gyantse dzong can be seen in the background on the left of the image

Other Information - Description: [Extract from taped interview, Richard Blurton and Mrs Hopkinson] '87 - a monk from Sera on pilgrimage, perhaps to Shigatse. His right hand is held in the position of saying thank you - palm out with thumb up' [MS 29/07/2006]