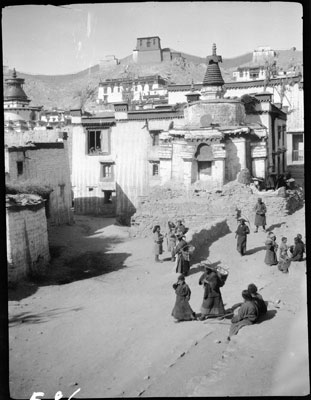 A scene inside the monastery compound of Palkhor Chode at Gyantse. Religious buildings and the precinct wall can be seen in the background. Women and children, some with large baskets on their backs occupy themselves in the street below the photographer

Other Information - Description: [Extract from taped interview, Richard Blurton and Mrs Hopkinson] '86 - a street inside the monastery compound at Gyantse. A large chorten and teh Palkor Chorten (to the left) are seen; in the background is the monastery precinct wall' [MS 29/07/2006]