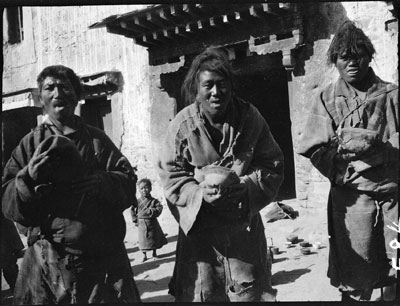 Three convicts in Gyantse, begging for alms and putting out their tongues as a sign of respect. Hopkinson commented in his journal for this day that they proved difficult to photograph because they kept laughing. Joists of a doorway in the monastery compound of Palkhor Chode can be seen in the background. A small child watches the photographer and a number of small vessels can be seen on the ground behind the convicts