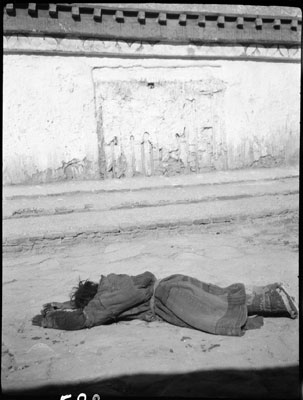 A pilgrim prostrating along the ritual route in Gyantse. The walls of Palkhor Chode monastic compound can be seen in the background

Other Information - Description: [Extract from taped interview, Richard Blurton and Mrs Hopkinson] '82 - woman doing full-length prostrations around the Palkor chorten and the temple in the monastery compound at Gyantse' [MS 29/07/2006]