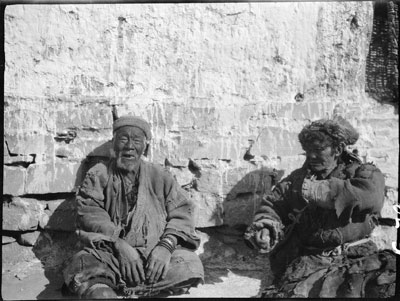 Two beggars seated against a wall in Gyantse wearing animal skin chuba. The man on the left has rosary beads tied round his wrist

Other Information - Description: [Extract from taped interview, Richard Blurton and Mrs Hopkinson] '78 [sic] and 80 - a group of monks, probably in Gyantse. On the wall behind them is matting protecting mural paintings' [MS 29/07/2006]