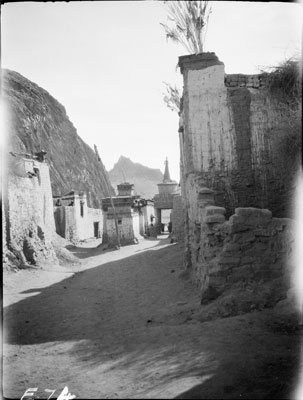 One of the entrances in Gyantse - a gate beneath a chorten. Gyantse dzong or fort can be seen on the top of the hill in the distance

Notes on print/mount - One contact print made from this negative is contained in A. J. Hopkinson's negative case with the negative. The caption "A scene in Gyantse" has been written on the back of the print in pencil, as have the two references 'H.43' and 'E-74' [MS 31/07/2006]

Other Information - Description: [Extract from taped interview, Richard Blurton and Mrs Hopkinson] '74 and 75 - one of the entrances into the town of Gyantse, with in the mid-distance a chorten with a passage through it, and beneath which one had to pass. In the distance is the dzong . Visible also are poles carrying prayer flags, and bunches of branches carrying block-printed charms - these are stuck on to the top of walls' [MS 29/07/2006]