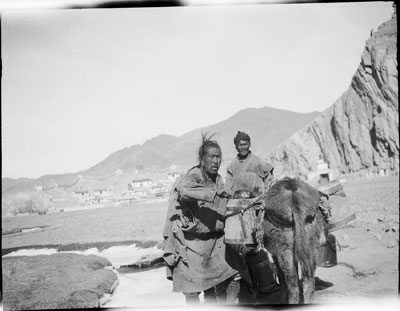 Two Khampa men collecting water from a frozen stream outside Gyantse. They put the water into wooden buckets carried by a yak or dzo. Gyantse monastery can be seen in the background

Other Information - Description: [Extract from taped interview, Richard Blurton and Mrs Hopkinson] '73 - taking water from beneath the ice. A man ladles water into wooden buckets which are strapped on to the back of a mule. In the background is visible the circuit wall of the monastery, the monastery itself and the Palkor Chorten' [MS 29/07/2006]