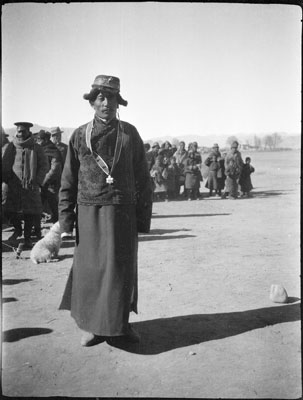 Tsering Wangdi was head Tibetan clerk to the British Trade Agency in Gyantse. On Christmas Day 1927 he was awarded the title 'Rai Sahib' and he is here seen wearing his medal on the sports ground near Gyantse dak bungalow. A crowd of onlookers who had also witnessed the Regimental sports stand in the background. Mr Major can be seen on the left in a hat, woollen scarf and facing the camera