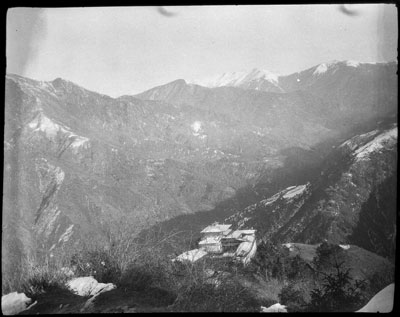 Kargyu monastery in the snow seen from above. Photograph taken in the winter of 1927-28

Other Information - Description: [Extract from taped interview, Richard Blurton and Mrs Hopkinson] '30 - Different view of teh above' [i.e.: E.29 - '29 - the monastery of Kargyu, whose abbot (unphotographed) was indistinguishable from an Indian Saddhu. In an early letter AJH mentions that there were large sculptures here of the Buddha - these were not seen by Mrs H., though she recalls a magnificent gilded copper figure of 1000-armed Avolokitsvara'] [MS 29/07/2006]