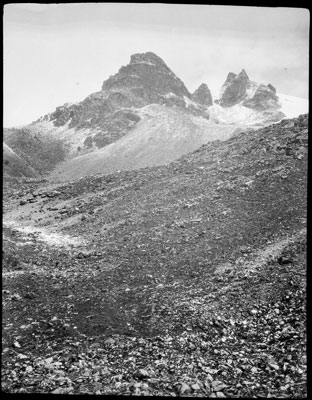 The summit of the Tangka La, one of the crossing points from the Chumbi Valley into Sikkim in the northern part of the Chumbi Valley. A. J. Hopkinson comments travelling on this route only once in his journals and diaries [see Notes] and it seems that this photograph may, therefore, have been taken on or around September 15th 1927 when he was en route from Yatung to Sikkim via Tangka La.

Other Information - Description: [Extract from taped interview, Richard Blurton and Mrs Hopkinson] '12 - near the summit of the Tanka-La, between Phari and the Dochen Tso. In one of the letters of AJH he mentions that you cross the pass almost without realising because it rises only very gradually. It was not an obvious pass. On the route between Sakya and Shigatse there were many such passes - they were really just saddles between rounded hills' [MS 29/07/2006]