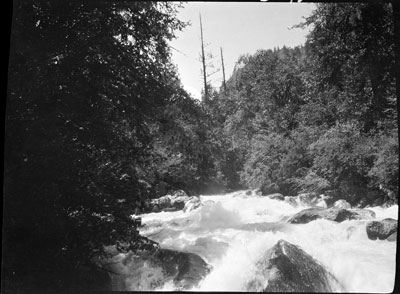 Notes on print/mount - One contact print made from this negative is contained in A. J. Hopkinson's negative case with the negative. The caption 'Tangka La Valley - a scene near typical view near Yatung' has been written on the back of the print in pencil, as have the references 'D.95' and 'H6' [MS 29/07/2006]

Other Information - Dates: This image may have been taken on or around September 15th 1927. At that time A. J. Hopkinson travelled via Tangka La from Yatung to Gangtok to take leave. This was an unusual route as typically officials would travel to Gangtok via the Natu La, south of Yatung. For dating of image, see A. J. Hopkinson Archive, OIOC British Library, Mss Eur D998/54, Journal Letters from Gyantse and Various Camps, 1927-28, commencing September 15th 1927, Camp Tangka La, page 1 [MS 29/07/2006]