View of Yatung from south west 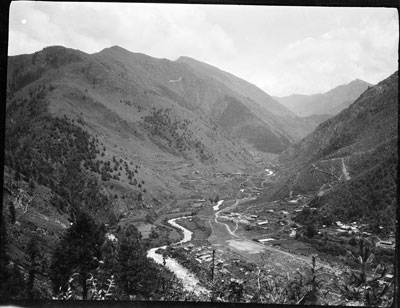 A view of Yatung taken from a hillside to the south west of the village. This photograph clearly shows the layout of the settlement and its relationship to the river and main routes into and out of the village

Other Information - Dates: Hopkinson returned to Yatung from Gyantse in July 1927 and remained until September. This image has clearly been taken consecutively with those at Samada dated July 19th 1927 because the cut edges of the negative frames, which are quite irregular, match perfectly. Thus this photograph was taken shortly upon arrival back in Yatung at this time [MS 29/07/2006]