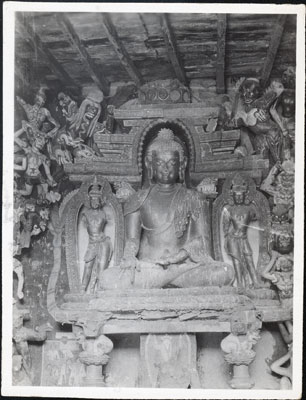 Wall carvings and Buddha statue in Shanang Monastery near Samada, which, according to A. J. Hopkinson, had been left empty since the Younghusband Expedition of 1904 [see Notes]. He visited the monastery on July 19th en route from Gyantse to Yatung. Unfortunately, while taking photographs of the interior of the monastery he damaged his camera [see Notes]. This image would have required a long exposure

Notes on print/mount - One contact print made from this negative is contained in A. J. Hopkinson's negative case with the negative. "Gyane Hlagang Interior" has been written on the back of the print in pencil, as have the references 'D.88' and 'H.6' [MS 29/07/2006]