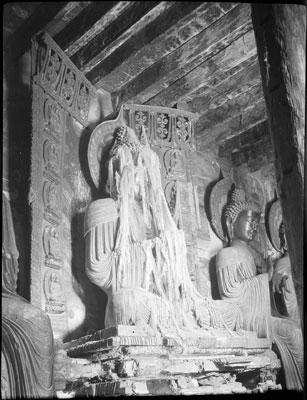 Images in Shanang Monastery near Samada, which, according to A. J. Hopkinson, had been left empty since the Younghusband Expedition of 1904 [see Notes]. He visited the monastery on July 19th en route from Gyantse to Yatung. Unfortunately, while taking photographs of the interior of the monastery he damaged his camera [see Notes]. Here, a central image draped in offering scarves can be seen flanked by other images with very detailed carving. The wall carvings are also seen very clearly in this image, which required a 45 minute exposure [see Notes]