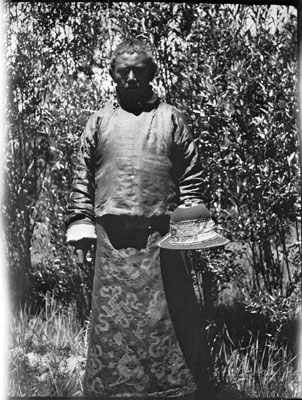 The monk official who acted as Dorje Pamo's doctor standing in a garden (left), with another man who is holding the Doctor's brocade hat in his left hand. Dorje Pamo was the highest female incarnation lama in Tibet. Although Hopkinson does not comment fully upon his relationship with this man, by June 1927 he referred to him as "my old friend" [see Notes]

Other Information - Description: See A. J. Hopkinson Archive, OIOC British Library, Mss Eur D998/54, Journal Letters from Gyantse and Various Camps, 1927-28, commencing June 26th 1927, Gyantse, pages 4-6 for the fullest account of a meeting with this man and Dorje Pamo herself, in which Hopkinson refers to his friendship with the Doctor [MS 29/07/2006]