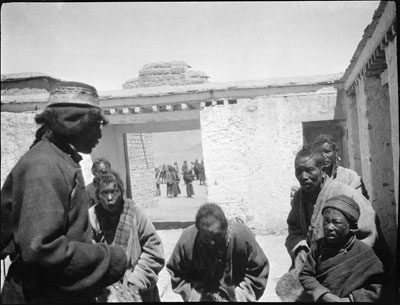 This image seems to have been taken inside a dak bungalow, possibly that at Phari. One of A. J. Hopkinson's clerks can be seen on the left distributing payments to a group of men who have been assisting the march between Gyantse and Yatung and who bow before as a sign of respect. They are standing inside the courtyard of the dak bungalow and other people can be seen outside through the gateway

In Negative - 'D 16' has been written in blue ink in the top right corner of the negative and in the lower right corner along the right edge and then, in both cases, struck through [MS 14/07/2006]