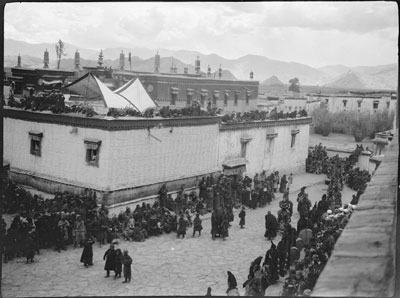 Crowds at one of the sites of Palkhor Chode in Gyantse as a procession of monk musicians parade through. Crowds can be seen on the roofs, and an awning can be seen over a courtyard in the centre of the image

Notes on print/mount - One contact print made from this negative is contained in A. J. Hopkinson's negative case with the negative. The caption "Palkor Choden' has been written on the back of the print in pencil, as have the references 'D.51' and 'H6' [MS 17/07/2006]

Other Information - Dates: It is not certain when this photograph was taken. It appears in the middle of an album of negatives [Album D] which generally derive from the period March - July 1927. However, Hopkinson makes no mention in his journal letters of this period of attending such an occasion at Palkhor Chode. He does, however, mention visiting one of the monastic establishments of Palkhor Chode for the end of year ceremonies in 1928, at which he witnessed Black Hat dancers performing. It appears that there may be Black Hat dancers in this procession and this photograph may, therefore, have been taken on that date, the image at a later date being repositioned in Album D just before a series of images of a large ceremony at Tengoling Monastery [MS 17/07/2006]